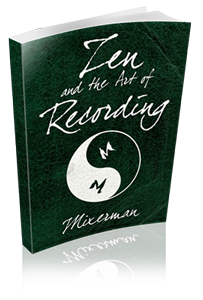 From Zen and the Art of Recording:
© All Rights Reserved

The best way that I’ve found to record acoustic drums, really, for just about any genre, is a top-down approach. This means you start with an aggregate stereo sonic image and then use close mics to supplement the sonic information and balances. The aggregate is captured either with your room or overhead mics, and the decision as to which depends mostly on how the room itself sounds.

Overhead mics used for purposes of the aggregate stereo capture must be placed high enough, and perhaps back enough, to capture all the kit information. Of course, the more distance between your overhead mics and the drums themselves, the more aggregate room information you will collect. Your overheads could sound more like room mics should you place them too far above the kit.

A ceiling height of eight feet or less is insufficient for a good stereo image. The early reflections returning to a mic just a foot off the ceiling will smear the image and accentuate harsh high-frequency information. Absorptive treatment of the ceiling will only serve to make the tone of the drums boxy. Like I said, drums require space.

As we discussed earlier, baffling is a good way to control the ambience folding back into the microphones, thereby allowing you some control. Just make sure you don’t over-baffle, as you could choke out all of the room’s positive attributes. By adjusting the number of absorptive baffles in conjunction with their distance from the kit, you can attenuate the amount of ambience returning to the mics.

When placing baffles, you should be mindful of sight lines. Musicians tend to perform better when they can see each other, and communication is easier when you can make eye contact with your players. A baffle shifted two feet in either direction shouldn’t compromise the recording. The exact placement of the baffles will have less significance than the amount of absorptive material you’ve introduced to the space. If you’ve added too many baffles, you can remove one at a time, and/or pull them further off the drums.

It’s often preferable to place a drum kit a few feet off a wall or corner rather than in the middle of the room, and that really has more to do with your ability to control the room than any other factor. Whenever I find myself in a room for the first time, I seek the counsel of the studio personnel, who can usually tell me where the drums tend to sound best. A poor source placement will make for a poor recording, and the staff will likely know the sweet spots as well as the positions to avoid.

The goal with top-down recording is to capture a convincing stereo image of the drums in balance. The better the drummer and the room, the better the balance, such that you could conceivably record perfectly balanced drums with nothing more than a stereo pair of mics.

Oh, I realize that statement probably just made you shake your head in disbelief. And I know why too. Because if you haven’t heard one of the top players in one of the best rooms, you can’t even fathom how good the capture will be, nor how simple the procedure. I’m telling you, I could easily record a well-balanced drum tone in certain rooms with certain players, with nothing more than two mics.

Of course, that leaves little room to maneuver later, and as much as I don’t mind working without a net (relish it, even), I haven’t completely lost my mind, thank you very much.

SDCs are particularly good at capturing a balanced stereo aggregate of the kit. AKG 451’s, 452’s, B&K 4003’s, and Neumann KM84’s are all good choices, although there are a great many SDCs that will do the job outside of that rather abbreviated list.

I’m much more likely to use LDCs on a straight-ahead rock kit, as they tend to offer a feeling of aggression. Neumann U87’s, U47’s, M49’s, AKG C12’s, 414’s, the C24, and the Shure SM69 are all common LDC choices for overheads. Once again, availability comes into play.

Ribbon mics can be superior for overheads when you’re looking to smooth out the more aggressive frequencies of cymbals. They’re also a great choice for capturing an aggregate drum image. My absolute favorite ribbon mics for drums are Coles 4038’s.

Overhead compression is best performed with either a stereo compressor, or two linked mono compressors of the same variety. You’re going to have all sorts of whacky reactions if you use compressors with different properties and reaction speeds. The Fatso Jr. can be an exceptional choice, particularly if you don’t have ribbons available, as the “warmth” function does similar things to the top end. The API 2500, Urei 1178, Neve 33609, Crane Song STC-8, and A-designs HM2 Nail are all stereo compressors I’d consider for overheads. It’s very easy to overcompress overheads (especially with the 2500 and the 1178). Copious compression will tend to extend the ring of the cymbals and the ambience of the room, depending on your attack and release settings. You can’t undo that compression later, so be sure the tone suits your recording.

X-Y is probably the easiest method for miking overheads. However, X-Y methods can get a bit tricky with LDCs given their general size and bulkiness. It’s far easier to use an X-Y stereo miking technique with a pair of SDCs, and easier still to use a stereo mic. If the kit is particularly sprawling, a spaced pair might be desirable over an X-Y technique.

There will be times that you may prefer to primarily capture cymbal information with your overheads, either because you’re using room mics to capture the aggregate, or because you seek to maximize immediacy by relying on close-miking techniques. A ceiling height of eight feet or below will virtually force this decision. A spaced pair of LDCs just a foot or two off the cymbals should help with the maladies caused by a low ceiling.

Be careful about how close you put the overheads to the cymbals. You don’t want to pick up the rush of air from a flailing cymbal. Those mics also become susceptible to a strike from an errant stick. If your mics are in danger (and that depends on the overall motion and dexterity of the drummer), then you might consider a compromise placement.

When monitoring drums in isolation, the balance of the cymbals will often sound too loud outside the context of the track. Even knowing that, I get uncomfortable without hearing other instrumentation. I don’t care how exceptional your vision, you put yourself in a tough position attempting to make mic placement decisions on drums without context for balance decisions.

The overall usefulness of your room mics has mostly to do with the quality of the room itself. Once again, an insufficiently sized and treated drum room will render room mics virtually useless, as the ambient information will contain an inordinate amount of early reflections, which results in phase coherency issues being caused by the room itself. Further, not all drum tones call for room mics, and if you have bleed from other instruments seeping into the drum room, those mics will act as an ensemble-room rather than a drum-room capture.

On those occasions when room mics are a nonstarter, you can always re-amp the drums later in a more appropriately sized room. Whenever I mix in a commercial facility, I ask the assistant to set up two mics and a PA for purposes of a makeshift chamber. I’ve re-amped to create a usable room mic on many occasions, and while it’s certainly not ideal, it can be considerably more organic in tone than a digital reverb.

One of my favorite mono room mics is an SM57, particularly for rock drums, and especially in large ambient rooms. Room mics are susceptible to excessive cymbal information, depending on their placement and the overall aggression of the drummer. In order to accentuate the beautiful room action caused by the skinned drums, you need to be sure that you’re not also introducing overbearing cymbal information into the balance. Place an SM57 behind a short baffle as distant from the drums as possible, and face the mic away from the drums towards the back wall. Both the distance and the baffle will greatly reduce the cymbals within your mono room mic capture, providing you with the warm ambient slap off the wall. The natural midrange boost of an SM57 accentuates the crack, and minimizes the wash of the room tone.

Compressors are quite useful for room mics, as you can extend the size of the room by bringing up the apparent ambient information in the capture. Compressors can also help you balance your aggregate image, and if you set a VCA compressor to a fast attack and release setting, you can easily distort your room as you simultaneously extend its apparent size. Distorting rooms adds all sorts of goodness to drums. The Urei 1178, API 2500, and Neve 33609 are all useful analog room compressors.

How aggressive you want to be with your room compression on the initial recording is a matter of taste and production needs. However, if you seek to smash the room mics, you should do so at a time when you have access to analog compressors. You can always use bussing to record both the smashed and natural rooms at the same time.

If you find that the delay of the room capture (due to distance) is causing the drums to feel out of time, you can use your DAW to slide the audio files back in order to reduce the flamming effect. The room smack is naturally delayed given its distance from the source, but sometimes it’s preferable for the tail of the room to occur nearly simultaneously with the hit. That’s an artistic decision. In general, the room mics should be far enough away to avoid any overt phase coherency issues with this technique—but always verify.

Once you have a well-placed aggregate image, you can analyze the balance issues by bringing up your close mics. It’s fine to work in isolation when you pull your initial close mic tones, but you also need to constantly check them within the context of the aggregate. You don’t necessarily want to accentuate the sound of the beater hitting the head if you’ve already got plenty of that information contained in the overheads, and this could affect your close mic placement decisions. Besides, it’s typically the low-end information that needs to be supplemented in your aggregate picture. #Mixerman

Zen and the Art of Recording is the third book in my ongoing Zen and the Art of series. The digital versions (Kindle, eBook) contain loads of supplemental videos. You can purchase any and all of these books HERE.

If you’d like to discus these concepts further, join me and my knowledgable friends at Mixermania

Be sure to read my newest book! #Mixerman and the Billionheir Apparent – a satire of the Modern Music Business through the prism of US Politics and vice versa.