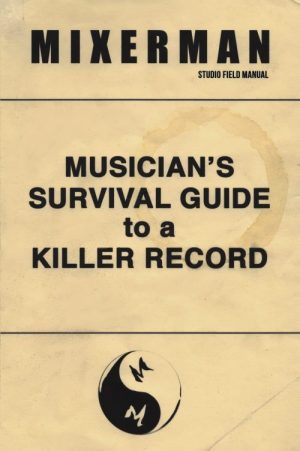 Great news! Musician’s Survival Guide to a Killer Record started shipping just 45 days ago and there are already 23 reviews on Amazon US (and UK), every one of them 5 stars. And while I realize that many of my fans come from a recording background, even professional engineers are telling me this book helped them tremendously. So not only is it the kind of book that you give to yourself to help improve your records, it’s also the kind of book that you can give to your musician clients and it will only make life easier for everyone involved. Because if musician’s understand what you’re doing, they will be able to concentrate more on what they are doing. Bonus! And as a musician making your own record you will make giant leaps in the quality and effectiveness of your recordings, which will set you up for success. Here are some of the things that people are saying on Amazon:

“This book provides great inspiration for the self-recording musician.

“Another great read from Mixerman… entertaining and informative.

“This book is packed with useful information for all levels of recording enthusiasts (hobbyists to professionals)..

“There’s no fluff, nothing superfluous—this is the straight dope for musicians who need to record themselves.

“I was surprised at how many false assumptions I’ve been operating under, while making life more complicated than necessary. Thank you for this book, Mixerman.

“I highly recommend this book. It gets you thinking about things you may not have considered before and will also present some new approaches to things you’ve been doing for years.

The Holidays are nearly here. Pick up a few copies, keep one for yourself, and give it to your favorite musician clients. They will forever thank you. And while you’re at it, thank yourself too.

In other news, I have just re-released The Daily Adventures of Mixerman as a Trade Paperback on Mixerman Publishes. If you’ve never read that book, or if the last time that you did was when I posted it online, or if your copy was stolen (a sadly common occurrence) then pick up a copy or two.

As promised, here is the rest of the Intro to my new book Musician’s Survival Guide to a Killer Record.

Every concept that I present to you in this Guide can, and will, have an exception, in some cases more than one. Since musical style, equipment availability, and skill levels will vary so greatly among you, it would be impossible for me to consider every possible hypothetical scenario that you might come across.

At the end of the day, we make Art, and as such, any and all decisions, no matter how fucked, can be defended in the name of that Art. I even encourage that defense. But we must also accept that the Art is not the goal but rather the result. The goal is to cause a reaction, and where reactions to music are concerned, they are largely predictable in nature.

If I seek to cause you to dance with my music, I can choose an upbeat tempo, and place the rhythmic parts prominently in my production. If I want you to feel joyous, I can combine a skippy beat with major chords. If I want you to feel solemn, I can bring down the tempo and combine a low drone with minor chords. If I want to produce a feeling of mystery, I can employ diminished 7th chords. If I want to produce the feeling of anxiety, I can avoid harmonic resolution. There is no feeling that you could name that a clever composer couldn’t invoke through music and arrangement. In fact, a film composer will study in school the harmonic and rhythmic combinations that produce specific feelings. Many of us learn them by rote over time. But make no mistake, the Art is in how we manipulate emotions through our music in order to cause a reaction to it. So, while we can surely defend any decision that we make as artistic, if that decision works counter to the goal of a reaction, then your protests are nothing more than a rationalization.

Further problematic, as I attempt to break down the technical information to its core for you, I will have to ignore many exceptions. As much as I’m sure to qualify these with phrases such as: in most cases, usually, in general, predominantly, more often than not, sometimes, and on occasion–those can easily be missed, ignored, or forgotten.

For instance, when I say that dynamic mics have a pronounced midrange, that’s a reasonable generalization about a classification of mics. Is it true of all dynamic mics? Of course not. I offer the broad generalization for purposes of recording and purchase strategy. At the end of the day, what matters are the particular traits of the microphones you have available to you.

When I suggest that you won’t get big beautiful drums from an undersized room, that doesn’t mean you can’t record radically cool drums in your bedroom. Maybe you can. But if you don’t like what you’re hearing on the mics, then you need to problem solve, which becomes exceptionally difficult when you don’t understand the nature of the problem in the first place. You can change the player, the instrument, the mics, the mic placements, the mic preamps, the converters, the compressors, and the EQs, and none of those will have addressed the root of this particular problem–the room itself.

Any and every suggestion that I make in this Guide is based on situations that I’ve come across in my 30 years of record-making. These are generally hypothetical in nature and will not align perfectly with your experiences. Therefore, you need to make all of your decisions based on the reality of your specific recording situation. And you need to operate within your own likes and preferences–not mine. It’s your Art. I accept this.

The whole purpose of this book is to provide you with a method in which you build an arrangement with intent. It doesn’t really matter whether you build your record through the overdub process or the pre-production process as a band. Either way you’re still arranging your record with intent.

In many ways, it’s easier to arrange for a band than an Artist, because the instrumentation is pre-determined by the lineup. The problem is, you need a bit of space and equipment in order to record a full band at once. And while you could all cram into an empty bedroom and capture it with one mic, the point of this book is to make a Killer Record. Not a demo.

These days, I bring bands into the studio predominantly to capture drums. That’s not to say I slough off the rest of the parts. I prefer to capture the full band at the time of my tracking session if I can. But make no mistake, in most instances, on most records, I must successfully capture my drums on that initial session. Any other problem I can fix in the overdub process without incurring great expense.

The overdub process is the predominant method for making a record. Even for bands. That doesn’t make it the only method. There are some genres that all but require the band to perform together. And as much as I suggest you keep things simple, including your arrangements, that doesn’t necessarily translate into simple music. A straight-ahead jazz quartet performing Bud Powell compositions is far from simple music; meanwhile the arrangement comprises nothing more than a rhythm section.

Straight-ahead jazz and bebop are about performance and improvisation as much as, if not more than, the songs. As such, the collective musicianship of the group is part of the fan experience. To employ overdub trickery would result in a record far outside of expectations for both the quartet and fans alike. And whereas straight-ahead jazz requires a group performance, most modern genres don’t.

The overdub process is a contrived process in which we are able to build a record one part at a time. While music programmers often start with a blank screen and build a production from nothing, a band of musicians typically composes a song, works out their basic parts for the capture, and then overdub what’s missing. The live arrangement of rock bands is often just a stripped down version of the record.

Just because you only have one guitar player in your rock band doesn’t mean you’re restricted at all times to one guitar part. If you want a double crunch guitar in the chorus for purposes of lift and contrast, then it merely requires an overdub. It makes no difference that you can’t perform the double live. Your fans love the song, and will be too swept up in the energy of the show to care.

Classical music also must be performed. And while it’s true a classical record producer will edit a final take between many performances, she still captures those performances as a group in a hall. In a live capture the musicians work together at the direction of a conductor to produce one sound. To record four string players at once in an appropriate room is not the same as to record four string players one at a time. The harmonic interaction between the instruments and the players is lost, which means the subtle tuning and timing adjustments that occur on the fly between the players no longer exists.

As musicians, if we play together, we are reacting to one another. If you play first, and then I play, then I am reacting only to you. We aren’t reacting to one another. Not only that, but our instruments aren’t interacting in space. When we play together we are creating vibrations in a room, which not only affects how we play, but how our instruments react. This is why piano samples leave so much to be desired. The harmonic interaction between the strings is mostly lost.

When a violinist plays a C and the viola player next to her performs an E, their instruments are interacting with each other, and the sum vibrations of those notes is reacting in the space. You can’t recreate that interaction in an overdub process. More importantly, you can’t recreate the two-way musical interaction between players, and the more players you add, the more obvious the disconnect.

This is not in any way an argument against the overdub process. The large majority of this book is based on that process. For most of you, it will be the predominant process, especially on your earliest records. But if you’re in a band, or a group, or in an instrumental section in which the circular interaction between performers and their instruments is critical to the quality of your record, then you cannot accomplish that purely through the overdub process. You need to organize the appropriate space and equipment for the capture, and that often means going to a proper studio. You practice as a group. You perform as a group. You go to the studio and you knock out your record as a group. The capture is the record.

As I said, most modern genres can be built wholly through the overdub process. And in all likelihood you are operating in less than ideal circumstances in which you have limited equipment, limited space, limited experience, and limited money available for your record. So long as you operate within your limitations, none of that will prevent you from a Killer Record.

What matters is the music.