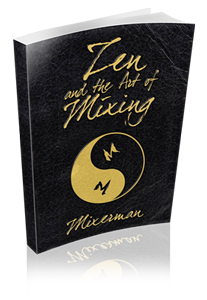 From Zen and the Art of Mixing:
© All Rights Reserved

Placing the vocal prominently in a mix establishes its importance. This is the primary method of harnessing the listener’s focus. While the vocal carries the all-important melody and lyrics, it’s still only one part of the total production. There are other parts in a track, and not only do those other parts have important functions, but our brains can actually decode them all at once. There are five basic functions in any given arrangement: melody, harmony, rhythm, response, and countermelody.

The melody, which is usually carried by the vocal, has the most important function of the arrangement and song. Clearly, we want the listener to focus mainly on the melody. The best way to accomplish this is to place the melody right in the center of the stereo field and as the loudest part in the mix. Just don’t make it so loud that it takes away the listener’s ability to decode the other parts of the arrangement. There is a track after all.

The rhythm of a track is what makes us move, particularly internal rhythm. While the drums and percussion often supply much of the rhythm on any given modern track, just about any other instrument can perform a rhythmic function in the arrangement. The bass, for example, often offers a profoundly rhythmic foundation in conjunction with the drums.

Response refers to “call and response,” which is found all over Western music. Traditionally, the term call and response refers to those situations where the singer offers the call and the chorus the response. The Who’s “My Generation” is a great example of this technique. Roger Daltrey sounds the call: “People try to put me down,” and the band sings the response: “Talkin’ ’bout my generation.”

Response can also be instrumental in nature. If guitar licks occur between vocal phrases, those parts act as a response to the vocal. This kind of musical response is designed to momentarily grab the listener’s focus and pass it right back to the vocal, and while there can be some minor overlap, for the most part a response part rarely steps on the vocal. When it does, it’s not a bad idea to ride the response level down at the point of overlap.

If you view a mix from the perspective of these five functions, you simplify mixing considerably. A drum kit and percussion can easily occupy 20 tracks in a rather large mix, yet they all serve a rhythmic function in the arrangement. You can break those 20 tracks down to a stereo pair. Many mixers naturally create stereo subgroups in order to manipulate them as a whole—myself included.

Arrangement isn’t just about what parts come in when—arrangement is also about how loud a part is within the context of a track. The relative balances of the parts will have a profound effect on how the listener hears the performance. As we’ve already established, a good arrangement is designed to cause a physical reaction. If importance is placed on the rhythmic instruments in a track, in both their quantity and prominence in the mix, the track is clearly designed to cause the listener to dance. Much of our modern music is designed around the principle of causing the listener not only to sing, but to dance as well.

Couple a heavy beat with a vocalist singing trite lyrics about moving to the beat, and it would be nothing short of ridiculous to bury the drums in the mix. You’re mixing a dance song. Given the relative unimportance of the lyric and the abundance of rhythmic parts, it should be clear that the beat is designed to have a more prominent role than the vocal. This doesn’t mean you’re going to bury the vocalist, particularly if she’s a kick-ass singer. But you certainly don’t want to place her in such a way that she weakens the driving force of the song. The parts themselves provide you with the information you need to mix the song. In this case the singer is literally telling you how to mix the song. There’s a word for this: prosody.

Prosody is the consistency between lyrics and music. For the songwriter, prosody is an important tool. A song in a minor key with a sad melody is going to have a sad lyric. If it didn’t, it’d be a bit weird. A song like “Wind Beneath My Wings” by design has a melody and a lyric that are both meant to be inspirational in nature (to someone other than myself, I’m sure). The emotional impact of the music is generally going to match the lyric, and this is the most basic form of prosody. Most good songwriters use basic prosody naturally and without even thinking about it, but there are also more literal examples of prosody.

Good prosody isn’t always quite so obvious. In Johnny Cash’s song “Ring of Fire,” the melody in the chorus actually moves up as he sings the word “down” three times. He sings: “I went down, down, down, and the flames went higher.” While at first blush, the lyric seems to literally contradict the melody, in reality Johnny is exposing the inherent contradiction between falling in love as opposed to love being an uplifting experience. This idea is represented brilliantly by the imagery of the lyric and specifically how it works counter to the melody, thereby illustrating musically the contradiction. There’s no doubt that this was a conscious decision by a great songwriter.

I bring up prosody here because as mixers we need to be aware of not only how the lyric interacts with the melody, but also how the melody and lyric interact with the production. Steven Stills’s famous ’60s song “For What It’s Worth,” which was first recorded by Buffalo Springfield, is an excellent example of how prosody was enhanced by the production. If the song doesn’t immediately come to mind, you’ll probably recognize the chorus lyric, “Stop children, what’s that sound, everybody look what’s going down.” In the last chorus of that song, the entire production comes to a halt on the word “stop.” Now, that was probably done in the recording process, not the mixing process, but these sorts of opportunities are often overlooked, and if you watch out for them, you can take advantage.

Another example of prosody from a production standpoint would be the Genesis song “Just a Job to Do,” in which Phil Collins sings “bang, bang, bang” in quick succession followed by two reverberant snare hits and the lyric “down they go.” In this case, the snare hits act as gunshots within the production. This is not only effective, it’s smart.

Don’t go nuts with this. If you add reverb to the snare every time you hear a word like “shoot,” or “bang,” you risk turning a good tool into an overused joke. The literal translation of a lyric into a production technique is good when used sparingly, particularly if the prosody accentuates something important within the context of the song. Furthermore, don’t use prosody to accentuate your role as the mixer, unless the song happens to be about the mixer (which happens sometimes in hip-hop). If you turn up the vocal when you hear the word “up,” you’re viewing prosody from the context of a mix move. We don’t ever want the listener to notice the mix, and that wouldn’t fall within the spirit of prosody as it relates to the production. #Mixerman

Zen and the Art of Mixing is the first book in my ongoing Zen and the Art of series. The digital versions (Kindle, eBook) contain loads of supplemental videos. You can purchase any and all of these books HERE.

If you’d like to discus these concepts further, join me and my knowledgable friends at Mixermania

Be sure to read my newest book! #Mixerman and the Billionheir Apparent – a satire of the Modern Music Business through the prism of US Politics and vice versa.