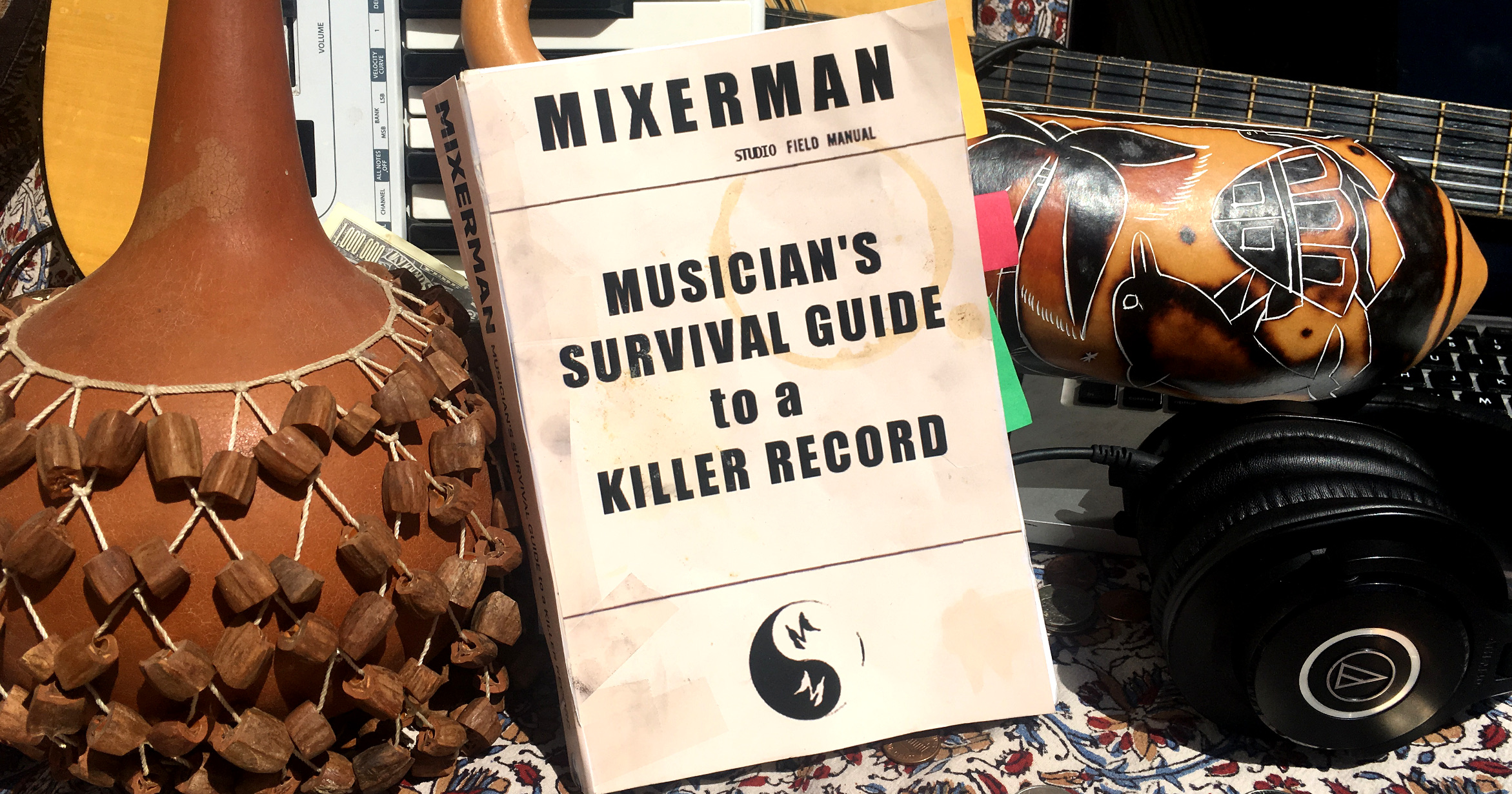 Before we get to today’s blog post, I would ask that you please forgive my absence these past few weeks. I still owe you all a follow-up Mix Notes episode (coming soon!), but I had to take a deep dive into writing the new book in order to take some pressure off. In my world, removing all distractions is how a book gets written. The good news is, I’m now ready to share some passages with you all.

For anyone who was unaware, my upcoming book is called Musician’s Survival Guide to a Killer Record. May all of your recording decisions be musical. And all of your technical decisions practical.

This week, I share with you a section from my second chapter, in which I explain some of the fundamentals of music and performance.

You can gain notoriety for musicianship that is outside the normal range. Beyond that, your skills as a musician are nowhere near as important as your ability to perform with confidence. For starters, your skills as a player are what they are, and there’s no point in waiting any longer for them to improve. Recording is going to improve them, because recording is a sonic mirror. You can hear for yourself where you fall short, which forces you to address those deficiencies.

The world is full of examples of performers that are technically atrocious at their instrument, who have figured out how to play in a unique and interesting way. Some have made their bad playing a feature rather than a bug. Bruce Springsteen is by no means a great singer. Yet somehow, he is the perfect performer for his songs. The Edge was no virtuoso in early days, but he had a style–an identifiable thing that was all his own.

That’s the trick right there. Write the songs that fit who you are as an Artist. And if you don’t know who you are yet, then you need to figure that out. Your early recordings are the best time to do that, and many of you have surely begun the process. But if you’ve been recording yourself for more than a minute, and you still don’t have a brand? That would be mission critical.

Giuseppe Venuti, a 20th century Jazz violinist of note, famously said, “if you’re gonna make a mistake, make it loud so everyone else sounds wrong.” The last part seems more of a joke, but the first part—if you’re going to make a mistake, make it loud—that’s where the wisdom lies. A loud mistake is one made with confidence. So long as you perform with confidence, people will either believe your mistake was on purpose and proclaim you a genius, or they will praise you for your reckless abandon. Either way, you win!

Of course, we must remember, in a live setting a mistake is here and gone and usually forgotten. In a recording, a mistake is forever, but you get as long as you like to correct it. This gives you a tremendous amount of latitude, because the punters understand what a take is. As far as Music Fan is concerned, if you leave a clunker in there, it was on purpose. But if you try to hide a part? You just told on yourself. Show business is an act, even in its most earnest and heartfelt form. Treat it like an act at every stage. If the part is good enough to be in the production, it’s good enough to be placed loud in it.

Now, there are plenty of parts that could be considered nuance or texture that are by design meant to be balanced lower than other parts in the production. There has to be a winner when it comes to your balances, and I don’t see any reason why the winner should be a keyboard pad meant to offer a little harmonic support. But if it’s a part that beckons for attention? You need to place it loud or not at all. Which is exactly what will happen if you send it to me as a mixer. Because when I place a part really loud, no one will ever doubt that it was done on purpose. Confidence sells.

If you’re confident live, there’s no reason why you shouldn’t be confident within the confines of your Womb—that is to say, your creative space, which is a warm and inviting place of solitude in which amazing things grow and take shape. As you would expect, there’s no pressure in the Womb. It’s totally safe. You can take as many takes as you like to develop parts and lay them down. And you don’t ever have to release your record until it’s right. You have permission to perform badly until you perform well. It’s called practice.

Of course, too much time can be detrimental to the process. There have been a number of big name records to come out over the years with a proclaimed never-ending budget, and most of those projects should have long been aborted. Time is money. So, if money is no object, then time is no object too. Unless you have no money. In which case you really don’t have time to fuck around.

Some people find it difficult to finish a record. Or worse yet, they record the same record over and over again in the hopes that it will one day meet their expectations. I don’t really get this. Why would you practice by recording the same song over and over again? If that song was really going to be the one for you, it would have gotten some reaction the first time. And if you’ve got fans, then I’m quite certain they would want to hear something new. If finishing a record is an issue for you, then the most important thing for you to do is to finish your record. Then set it aside and record the next one. Because if you don’t finish your records and move forward, your progress stagnates.

The way to finish a record is to aggressively build the production until it’s complete. I find the best way to achieve this is to do, rather than to think. When you doubt your early decisions you’re acting as your own worst enemy. Those doubts are usually just a distraction, and until you’ve managed to complete more than a few records, all negative thoughts should likely be observed and then ignored. You don’t learn how to make a Killer Record by making one record perfect. Your greatest lessons come from finishing records. But if you seek to make your record production perfect, you’re never going to be happy with it. Perfection is unattainable and happiness is a state of mind. And besides, the best records in history are anything but perfect.

Then there’s the ADD and ADHD crowd, who see every option available to them and want to try them all. For whatever reason, the musician population got more than their fair share of folks burdened with this affliction. If lack-of-focus describes you, then this must be addressed.

I mean, if you can write great songs, and you have a story to tell, then you should want to tie the production emotionally to the song. Surely, you think about the song and how it makes you feel as you’re writing it. Clearly what you write will reflect your mood. Your production should reflect that mood too. It’s all well and good to create something unique, but if all you see are possibilities, then unique becomes the goal in a world where people flock to familiarity. So, not only are you focused on the wrong goal, but you’re also out of step with what people like.

Once again, your goal is to write and perform the song in such a way that it causes a reaction. It’s not to create the greatest, most interesting production of all time. And reaction is best achieved through a production that fits the song.

What feelings does your song evoke? What is the best way to present that song such that it accentuates those feelings? Is the goal to cause someone to dance? To cry? To laugh? Triumphiance? Angst? Is the song dark? Is the song humorous? Your music is designed to cause people to feel a certain way and to move a certain way, or at least it should be. The production should accentuate those feelings.

I know that my production is close to finished when I can’t stop singing and moving to the record. Basically, I forget to listen because I can’t stop enjoying the song. This is how you know you’re getting close to your record too. You judge your record by how it makes you feel and react. Because when the record causes you to react, it will cause others to react in a similar manner. The question then becomes how many people?

Preorder the paperback at Indiegogo (take advantage of free shipping)

Preorder the eBook at the Kindle store for just $9.99 (for a limited time!)