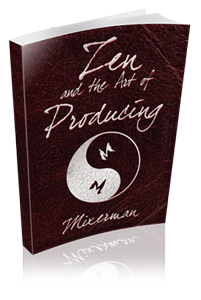 Vision, quite simply, is your ability to picture the final product before recording a single note. Vision alone is your most powerful asset as a producer, and more specifically, as the leader of a project. Without vision, you are like the blind leading the blind. If you don’t know how to present an act, if you don’t have a clear concept of the project at hand, then you have no business producing it. Period.

I can promise you this: if you don’t like the act, the song, or even the genre, then you will have no vision in regard to the project. You can’t possibly. How are you supposed to make a great production out of a song you think is awful? Does that make a whole lot of sense? You can’t lead if you don’t know where you’re going, and you can’t possibly know where you’re going with a production if you don’t adore the material. And I mean adore.

Clearly, your vision for a project is not so clear that you can predict with absolute accuracy the final result. There are far too many variables for that. The free will of your talent alone would make that impossible. So, vision isn’t some form of clairvoyance. Vision has to do with the basic conceptualization of the album, in both sound and approach.

Your vision should take into account the likely, or even preferred, audience demographic. Again, you’re not trying to completely change the band, you’re trying to present the band in a way that strengthens their musical appeal, and to a particular market. A hard-rock band requires a different approach than a pop band. The genre will dictate which conventions you adhere to, but music is far too complex to stay rigidly within the stereotype of a genre. Besides, how boring is that? Your goal is to create something stunning and new, but also recognizable. You must operate within and outside of convention simultaneously.

The recording process itself can and will carry great influence over the final product. Thirty days of recording time will yield a considerably different record from 10 days of recording the same band. The shorter time span with limited overdubbing gives you less time for polish. This will produce a far rawer product than that of a highly textured and painstakingly overdubbed product. Unfortunately, if you have an act that requires 30 days of polish in order to meet your vision, and a budget that barely covers 10 days, you could very well be unable to accomplish your vision. In other words, vision dictates budget, and budget dictates vision, and if you can’t reconcile the two, you can’t make the album. Not properly, anyway.

Now, you don’t typically conjure your vision out of whole cloth. All the information is there for you in the form of the band’s past records, demos, and live performances. You just have to figure out what it’s all telling you. This is true even if the band’s vision is on point. Merely recognizing this is a contribution on your part.

When you listen to every available track from a potential band, you should begin to get a clear picture of how you wish to approach the album creatively. It’s not enough to listen to one track and decide you have a vision for the entire project. That may be a fine vision for one song, but that song could also prove an anomaly in the grand scheme of things. If you don’t immerse yourself in the complete recorded history of the band, you won’t have the benefit of understanding how it developed and transformed over time. This is true even if your band has only recorded demos.

Listening to demos and previous recordings is an absolute treasure trove of valuable information. Band strengths and weaknesses will become apparent. The style that fits them best will be revealed. Subgenres will be discovered. All of these realizations go into the making of a vision.

For instance, you may discover that the singer sounds best in a particular range. This could make certain songs pop more than others. You will find songs that you think fit the band better than others. Helping a band to home in on a set of songs that seems to fit them best is a major part of carving out a vision. The band may have a tendency to cut their tracks too slow across the board. This could drastically change the audience a band attracts. If a band’s style and genre don’t jibe with their approach, they could very well make themselves unattractive to all.

Your band’s arrangement choices can also be quite revealing. As you investigate an act, you should find little threads that make them more interesting than the generic standard of their genre. It is a band’s uniqueness that sets them apart from every other band in their genre, and if you can find all those glorious distinguishing characteristics, you can take advantage of them in your presentation. It’s not enough to accept what makes a band different from everyone else. You want to exploit their differences.

Some of those tiny threads are considerably more obvious than others. If you dig a little deeper, you will likely find influences that fall outside of an act’s overall genre. A country act could have blues influences. A hard-rock act R&B influences. These could be obvious or subtle, but they’re important to both recognize and include as part of your vision. Cross-genre influences are like spices in cooking—they add flavor.

There will be times when a cross-genre influence is a sum negative for a given production. You could conceivably wish to quash a particular influence if you think it’s getting in the way of the intended audience, or even the feeling you wish to evoke. Certain parts can change the overall genre landscape of a song. A piano on a roots song can pull it into the country realm, and could alienate the appropriate audience. It could also be fresh, and work brilliantly despite being wholly inappropriate for the desired audience. Only you can make these determinations.

Genre influence can be contained within the fabric of the music too. Certain melodic modes, chord changes, and even lyrics can define the overall genre impression. These sorts of systemic genre influences can’t be eradicated through production. They can, however be significantly reduced.

I recently produced a song that was systemically a folk/country song, and outside of my vision for the band. Frankly, I found the song demo boring and one-dimensional, particularly within the context of the group as a whole. Still, there was a subtle ska thread contained within the demo, and ska would certainly change the vibe considerably. So we pulled on that thread, and made it a feature rather than an influence. This made the song infinitely more compelling. It also made it more appropriate for the insanely eclectic nature of the band.

I worked with an Australian band called Mammal some years ago, who were a gamble for me that didn’t quite pay off, seeing as they broke up just before they fully reached the mainstream. Welcome to the music biz! In the course of our initial interview, one band member asked me what kind of album I was going to make with them. It was a rather ambiguous question, one that would be difficult to answer if there was a lack of vision. Given that, it certainly wasn’t an unfair question. “I want to make an R&B album with you guys, but everyone else is going to listen to it and think you’re hard rock.”

Well, that shut him up. Apparently, it’s also what won me the gig.

There were a ton of R&B influences in the vocals. The singer was singing in a hard-rock style, but seemed to take an R&B approach to his melodic phrasing. Frankly, those particular influences are what made the band special to me. I’m not sure whether any of those influences will come out on the album to anyone other than myself at this point. My goal wasn’t actually to make the band sound more R&B, or R&B at all. The balance was already there as far as I was concerned. I just had no desire to eradicate those influences. It’s what I found compelling about the band. The bottom line is that the concept made sense to me, and it clearly made sense to the band. The best part of all? I didn’t come up with it out of the blue. They did. All I did was recognize that element in their music, and chose to utilize the influence so as to avoid making a purely conventional hard-rock album.

It’s not good enough to act as an organizational force for a project or band. You must be a creative force too, as that is what makes you valuable as their leader. The band (or even the artist) is so mired in being themselves that they have no perspective. They can’t pore through their music and determine what they are. That’s what you bring to the party. As an outsider you not only have the ability to evaluate a band and help them discover their true strengths and uniqueness, but you also show that to them in the form of their recordings. By the time you’re done with a project, the recordings act as a mirror for your group. They will see themselves clearly as a band, and what their roles are, because you will have spelled it out for them in such a way that they can’t help but understand it.

Check out my newest book #Mixerman and the Billionheir Apparent!