Zen and the Art of Producing by Mixerman 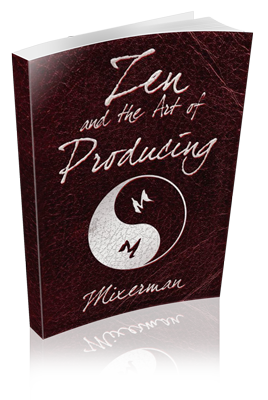 About Zen and the Art of Producing

Available in Paperback and Kindle.

Zen and the Art of Producing

All of the Zen and the Art of books are available as a Multimedia Edition eBook on Kindle, iBooks, and Nook, This enhanced multimedia e-book edition brings recordists deeper into the concepts covered in the text. The eBook features over an hour’s worth of supplemental videos in which Mixerman discuses with Aardvark the kinds of things he thinks about when producing an album. The full hour of clips provide invaluable insights into producing music and handling artists. This multimedia eBook is an absolute must-have for anyone who enjoys recording music and wants to get better doing it.

Zen and the Art of Producing Intro

Please Note: You must purchase the digital version of the book in order to view the clips.

In this companion book to Zen and the Art of Mixing–Mixerman discusses with us the art of producing records. Mixerman lays out the many organizational and creative roles of an effective producer as budget manager, time manager, personnel manager, product manager, arranger, visionary and leader, and without ever foregoing the politics involved in the process. As Mixerman points out, “Producing is an art in which reading and understanding people nearly always trumps any theoretical knowledge – whether musical or technical in nature.” Whether you’re currently positioned as musician, engineer, songwriter, DJ, studio owner, or just avid music fan, Mixerman delivers a seemingly one-on-one, personal lesson on effective producing.

Mixerman not only describes in detail the many important roles of an effective producer whether as product, manager, time, or personnel manager; organizer in chief; tour guide; psychologist; visionary; or fearless leader but also provides you with tangible strategies for fulfilling these roles within the context of the greater goal: the music itself. Once again, showing a firm commitment for art over technology, Mixerman outlines the thinking necessary to successfully produce records. As Mixerman points out, “Producing is an art in which reading and understanding people nearly always trumps any theoretical knowledge whether musical or technical in nature.” Be you a musician, engineer, songwriter, DJ, studio owner, or nothing more than an avid music fan, Mixerman delivers a personal, seemingly one-on-one lesson of all that goes into effective producing. Really, what could be more Zen than that?

Chapter One – THE PRODUCER

The Many Roles of a Producer

Be Flexible (Just Not Too Flexible)

How Producers Are Paid
The Production Contract

Preparing the Budget
Renting Studios
Preparing and Organizing Your Session

Overdubs
The Mix
Mastering
Wrapping Up the Project