Rather than look at tools such as virtual amplifiers and reverb units, loops, and synthesizers as technical devices that you need to learn how to manipulate and program, view them as modules that you can mix and match based on what happens to work best.

Surely some of you will take umbrage at that suggestion. Break my Art down to modules?

Yes. How is that any different from music?

I can promise you, over the course of thirty years of making records, this concept will manifest itself naturally and automatically, and there’s nothing that you can do to prevent it. Nor would you want to try. Music, and the recording of it is all about patterns.

Pardon the digression, but this is an important concept that I need to address, and this is as good a time as any.

Those are all common chord progressions that can be found in thousands if not hundreds of thousands of songs. They’re also patterns.

Surely, you’ve heard of court vision. An expert basketball coach who operates at a high level with decades of experience can see the entire court all at once. She can see how a play is developing, and she knows what every player is doing, and why they’re doing it, on both sides of the ball as it’s happening. Meanwhile, you or I see the girl with the ball. The ability to see everything at once? That kind of vision has everything to do with recognizing and processing patterns.

If you’ve ever gotten really good at something, like a video game or a card game or any kind of sport, then you understand patterns. Of course, if you ever took a music lesson, you’re also familiar with patterns. You started learning them on your very first lesson.

The first patterns in any new activity emerge quickly. As you progress, simple patterns combine to make larger pattern modules that help provide you with a wider view. As you continue to practice, new patterns emerge, which make even more composite patterns, which become a series of aha milestones along the way to mastering a skill.

We learn patterns through repetition. And although there are some people who seem to possess an almost unworldly natural talent that accelerates the learning curve, repetition is still a requirement. You don’t become great at anything without repetition. That includes music and recording too.

This is why I’m so insistent that you build your record from the ground up with intent, and that you stick to that discipline throughout your early records. It will force you to discover the most important patterns, that is to say, the musical patterns, because then you will think in terms of your music and not in terms of your recording.

You can become good at something rather quickly. All the other levels take time. Just when you think there are no more levels you hit a new one. Eventually, you become so good at something, that it doesn’t even look difficult anymore because it’s not. But there’s only one way to get to there. Practice.

There’s a reason why it takes 10,000 hours to become a master at something. It takes that kind of time to sufficiently familiarize yourself with the patterns. As someone with probably around 60,000 hours of recording, mixing, and producing experience, and tens of thousands of hours of writing experience, I can tell you, the discovery of patterns will never cease. But you have to be able to see those patterns, and that takes time and repetition. Lots and lots of repetition. There’s just no way around that. Because it’s not your ability to solve problems that gives you an edge as an expert. It’s your ability to quickly recognize solutions that makes you valuable. A newbie could solve any production problem that I could, given enough time. But then that just amounts to practice, and that would be the point.

Patterns allow our brain to break down a lot of information into modules. For instance: An arrangement comprises six musical functions–bass, harmony, rhythm, melody, countermelody, and response. Frequency can be thought of in four major bandwidths—low end, lower midrange, upper mid- range, and high end. Panning decisions become nearly binary—a part either goes in the center or on the sides. A four-piece horn section or a quartet of strings provides harmonic movement as a single unit. A drum kit with two kiks, two snares, five toms, a hi-hat and ten cymbals makes up one drum part, which fits perfectly into a stereo image. Layers of keyboards create a single textured part. Stacks of harmonies blend to become one chorus of singers. Five percussion instruments make up a percussion section. There are four microphone types with their own unique general characteristics—dynamic, LDC, SDC, and ribbons. Reverbs can be broken down to four types—plate, room, hall, and gated. Distortion is applied for edge, obfuscation, clarity, or sustain. Compressors shape tone, control dynamic range, and control low-end response. Contrast is effective for manipulating emotions, and forward movement. Certain chords call for certain resolutions. Song forms are basically comprised of some combination of the following sections: verse, chorus, pre-chorus, post-chorus, intro, outro, solo, and bridge. Patterns upon patterns upon patterns.

And I don’t have to sit and think for a long time to type out that list. I mean, you’ll have to take my word on this, but those patterns literally just flew out of my fingers because I have been through them so many times, and because record-making seems so simple to me now. And why not? Every production breaks down to just three critical elements:

The song, the arrangement, and the performances.

And where it comes to evaluating the overall effectiveness of those three elements, I need only answer in the affirmative to three questions.

Are the song and the production in alignment?
Does the track make me move the way that I should?
Do I find it difficult to stop singing the song?

If the answer to all three of those questions is yes, then I’ve made a Killer Record. The same goes for you. But I’d be remiss were I not to point out, those questions get awfully difficult to answer if you don’t absolutely adore the song. Read them again with that in mind.

A piano requires one mic. And sure you could record everything in stereo if you like, but that will have no bearing on your success other than to retard it. Because you’re trying to do too much with what is likely your biggest weakness. And surely some of you will argue that you must address your biggest weakness, to which I would say, we already are–by simplifying things down to their core. To simplify things isn’t merely an exercise. It’s a path to success.

It’s easy to imagine that experts employ all kinds of complicated recording techniques as they get better at their job. The opposite is true. I don’t overthink anything on the recording side. In fact, I try not to think about it at all. And there’s no doubt, that I can think far less about recording things because I’m so familiar with them. But if I go out of my way to simplify a process that I’m so familiar with, then why on earth wouldn’t you?

And yes, a big session with lots of mics in a big room, that complicates matters tremendously, and it requires space and equipment and experience, which is why even I hire a studio and an engineer for those times. Not because I don’t have the skillset to record in that environment. But rather because, as the producer, if I’m allowed to focus on the performance, the arrangement, and the needs of my Artists, then everything comes out better.

I’m not one to finish a record based on the clock. If the record isn’t great, the record isn’t done. But there is a budget, both in terms of money and in time, and we can’t pretend they don’t act as limiting factors. The fact of the matter is, you can only spend so much time on a piece of Art before it’s dead. And believe me, you can kill Art with love.

When it comes to mixing, I suggest mixers mix fast–as fast as possible– because fresh decisions are good decisions, and the longer it takes to mix the track, the less fresh you are. The same can be said about producing your record and even writing your song. Surely, there are amazing records that took longer than they should have, but those would be exceptions. Certainly there are Artists who must grind out every detail in the most painful manner possible—also the exception. Most great Art comes out of us like an unexpected vomit of creativity.

Over-thinking, over-processing, over-arranging, over-producing, over-singing, over-playing—these are all maladies that weaken a production. But what happens when we exchange under for over? Under-thinking, under-processing, under-arranging, under-producing, under-singing, and under- playing? None of those even exist. I’ve never heard anyone ever utter these sorts of criticisms in regards to a musical production. The only “under” term I’ve ever heard is underdub, and that’s the process of removing superfluous information due to over-production!

There’s no doubt about it. It’s way easier to do too much than it is to do too little. Therefore, the discipline comes in keeping things simple, not the other way around. Let me say that again in another way. The discipline lies in doing less, not more.

And now back to our regularly scheduled program.

There are currently 64 out of 64 five star reviews on Amazon. Larry Crane of TapeOp raved about it: “I think I’ll be buying cases of this book and handing it out as people enter my studio.” Why would a studio owner/ recording engineer (and publisher) give a book on recording to his clients? Because the more his clients understand about recording, the easier his life becomes. That’s why.

Pick up a few copies for the Hollidays and give them out to your musicians friends and clients. People love this book! 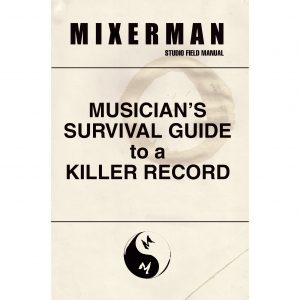