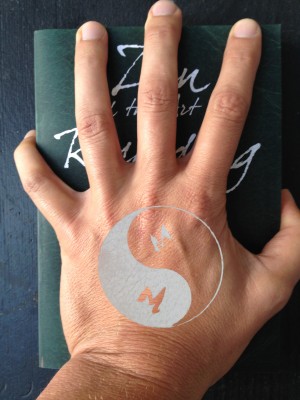 Zen and the Art of Recording
© 2014 All Rights Reserved

I don’t think I’ll ever forget the first time I ever recorded myself. It was sometime in the 70s when I was just a lad. My best friend had moved to Chicago, and long distance telephone calls were expensive (according to my mother). Rather than writing a letter, I decided to record one on a compact cassette recorder instead. Imagine my surprise when I played it back.

Yes and no. It was me, obviously. But it wasn’t a perfect replication of my voice, certainly not as I heard it.

Much of that perception has to do with the fact that our ear canals are nestled within a resonant chamber—our skull, which is, of course, attached to our beautifully absorptive body. This greatly influences how we hear ourselves, which is somewhat warped in comparison to the way others perceive us. In an age where a microphone and a camera are never more than meters away, most of us have experienced playback of our own voice and the usual discomfort that follows.

Oh, I did everything I could to alter the way my voice sounded on playback. I tried speaking in a softer tone closer to the mic. I tried speaking louder from a distance. I tried altering the pitch of my voice by accentuating certain words, much like a television announcer. After a number of hours of experimentation, dejected, I gave up. And while I’d managed to improve my results through trial and error, I was far too uncomfortable with the tone of my voice to continue.

Just about all of you have likely experienced this. Disdain for one’s own voice is common, especially when we’re first exposed to it. Eventually, most of us get over it. These days, I don’t even notice my own voice. Recording countless radio shows, interviews, and an audiobook tends to do that.

Then there was the time I recorded my high school rock/ska band with a single microphone in the guitar player’s basement.

Again, yes and no. The recording was certainly skewed, as a single mic placed randomly in an acoustically flawed room is not an ideal way to record a band. Upon playback, the drums were overbearing, and the singer completely garbled. Clearly the mic was too close to the drummer. Move mic, try again.

Too much guitar, not enough vocal. Move the mic closer to the PA speaker.

Too much vocal, and you know something? This mic sucks.

The balance of the instruments captured by a single mic clearly had everything to do with the placement of the mic. Of course, it was a $35 dynamic mic at a time when a Shure SM57 was just under $100. In other words, it was a piece of shit. It was also all we had. Besides, we weren’t looking to record a track for purposes of release. We just wanted to hear for ourselves what we sounded like, and if memory serves, it was somewhere in the range of atrocious and horrendous.

Recording is like a mirror. Unfortunately, it can sometimes feel as though we’re looking in an airplane mirror—which is typically magnified, warped, and lit in the most unflattering manner possible. I imagine this is done purposely to prevent people from spending countless hours admiring themselves. A recording is similar, in that it will reveal your flaws with brutal accuracy.

Our basement recording was a mess. The snares rattled from the bass. The low end was uneven, at times blossoming and resonating uncontrollably and thereby consuming the recording. And that stupid mic picked all of it up!

At the time, we chalked up the poor recordings to our subpar equipment. And while that surely didn’t help, the bottom line is, it did reasonably pick up what was happening in the room, at least how it sounded from that location. Frankly, a high quality mic and pre would have only managed to illuminate the truth of the matter. The problem was us. Put in recording terms—the problem was the source.

The room sounded like shit. Our instruments sounded like shit. And we performed like shit. The recording, while somewhat obfuscatory in nature overall, revealed these particular maladies with absolute fidelity. I mean, how could we listen back to a recording of our shitty playing, on our crappy instruments, in an awful acoustic space, and still manage to blame the gear?

Had we recorded the identical poor performance in a stellar recording space with the same crappy mic and receiver, we would have significantly improved the recording, as many of the room maladies would be eradicated. A larger space would give the low end more room to blossom, thus preventing a frequency buildup that consumes the recording and rattles everything in the room.

Had we hired well-seasoned studio performers the results surely would have improved significantly, even on our crappy instruments. And were you to give these great performers instruments worthy of their talents, the difference would be staggering, even using a single crappy $35 mic to capture the performance.

Most of you reading this (certainly anyone born after 1985) likely had childhood access to far more sophisticated recording gear than I did as a kid. As much as I’m a proponent of analog gear, a cassette deck captures with considerably less sonic fidelity than even the crappiest computer soundcard. That said, were you able to supply me today’s prosumer technology to record my childhood band, that recording would still be horrendous. The problem wasn’t the gear. It was the source.

I’ll warn you now. I’m going to hammer this to death throughout this book, and for good reason. There is nothing more important to a recording than the Source itself. When you place a great player with a great instrument in a great room, you actually have to go out of your way to fuck up the recording. I could record an amazing band with a wire recorder (that’s way before my time too), and it would still be clear upon playback that you’re listening to something special, despite the limited bandwidth of the recording.

Conversely, if we put a terrible player, with a decrepit instrument, in a problematic space, the best recording equipment will capture the awfulness before you with absolute clarity. Therefore, the Source is everything.

The moment the Source is compromised, you are merely engaged in damage control. A lousy room will have obvious artifacts. A lousy player is incapable of exciting even a good room in a manner beneficial to the recording. A subpar instrument can even cause a virtuoso player fits, as the brainpower required to deal with the inadequacies of an instrument will certainly affect his ability to perform. An instrument that has intonation issues, dead notes, live notes, generally anemic tone, or any other malady, will greatly limit even the most talented performer.

The Source is the totality of the tone, and can be broken down into three components. The player generating the source. The source instrument itself. And the room in which the source is performed. I will refer to these from this point forward as Source Player, Source Instrument, and Source Room. Make no mistake, all three of these Source Components determine the overall quality of the source itself. At that point, it’s all about the capture.

I’m not suggesting for a moment that you should, or even could, always record the most professional player, with the best instrument, in the best sounding room available. That’s not really how this business works from a creative standpoint nor a practical one. Besides, raw everyman performances, even reckless ones, can be exceptionally effective. Desired, even. So I’m not here to cast judgment in some abstract manner as to the definition of good. You are the arbiter of that.

There will be times when you will find yourself unable to verbalize the sound you seek, no matter how well formed the tone might be in your imagination. Such is the nature of creating art that must be performed. On those occasions you’ll be faced with a choice. Record the part and deal with the problematic tone later (which promotes uncertainty), or spend the time during the recording process to find the right tone. Even on those occasions when you choose post-processing to manipulate a source into compliance, you would be far better served to mangle the part the moment that decision is made. This way, both you and your musicians are monitoring the production with intent in place.

Surely, microphone selection, mic pre selection, and microphone placement will all have a great influence on the tone. On those occasions when you are stuck with a particular source instrument or player, how you capture becomes one of your more important weapons. Once that happens, you’re in some measure of damage control.

Frankly, I can teach you about mic placement in relatively short order, and while you’ll improve and refine this skill over the course of a career, what takes decades to learn is how to manipulate the tone at the Source to match a sonic vision. I can reduce that learning curve significantly. But even if you memorized everything in this book regarding Source Instruments and how to manipulate them to your recording needs, we won’t even scratch the surface of what you’ll encounter over the course of a career recording music.

I certainly won’t be able to remember every situation that I’ve ever come across, and even if I could, you will discover all sorts of things that I may not have experienced myself. Until you sit down to write a book on recording, I’m not sure you can really fathom just how much there is to learn. There are no shortcuts to experience. However, once you understand all the basic concepts and realize just how much control you have over the Source, you will have the tools necessary to record well.

Check out my newest book! #Mixerman and the Billionheir Apparent – a satire on the modern music business.